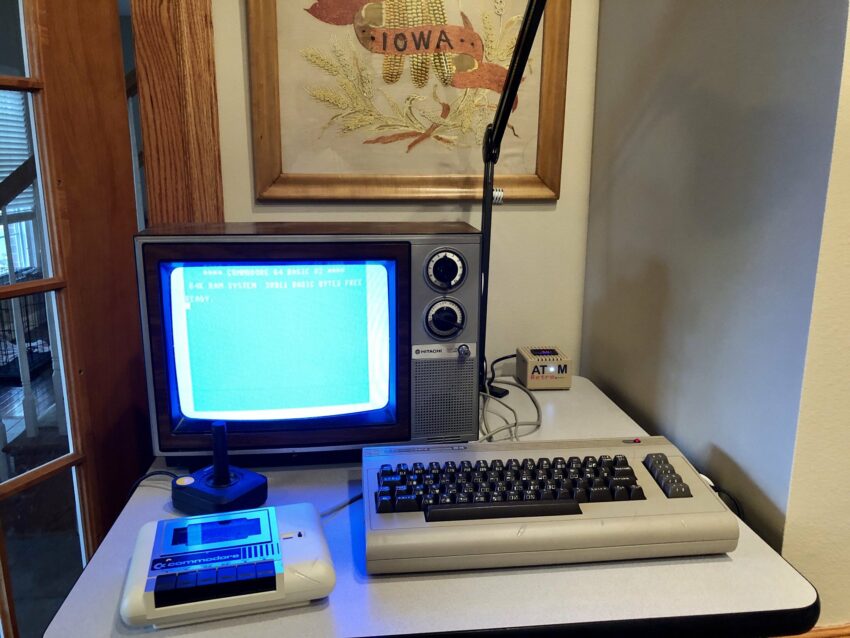 One of my earliest memories of using a personal computer was hanging out at my friend Mike Wolter’s house in 1986 and playing the text adventure game Zork on his Commodore 64.

I vividly remember the ritual of taking the floppy disk out of its paper envelope and inserting it carefully into the disk drive. Once the disk was inserted, the Commodore computer required you to type arcane commands in order to load from floppy and play the game.

The drive would stir to life with a bright red light and a symphony of whirring, clicking sounds as the floppy disk spun around and the drive’s magnetic head swept over it reading all the bits. After an eternity of waiting (about 90 seconds), you would be rewarded by the computer guiding you into a world of interactive fiction, with your imagination doing the heavy lifting of creating the sights and sounds evoked by the text of the game.

Fast forward 35 years, well into my own adventure earning a bachelor’s degree in Computer Science and a computing career now spanning decades, and I had never forgotten that feeling of learning new things and the sheer excitement evoked as a child interacting with that Commodore 64.

I had never owned a Commodore computer myself, but in the spring of 2020 a friend of mine found one in his father-in-law’s attic and asked if I wanted to have it. He was traveling across I-80 from Illinois to Colorado, so one afternoon I met him in the parking lot of a local coffee shop and swapped a bottle of Templeton Rye for that Commodore 64, a relic from my childhood. That moment sparked a journey in nostalgia and a reacquaintance with the very fundamentals of computing. Over 18 months later, that exploration into the past with the Commodore computer has greatly enriched my knowledge and appreciation of the history of computing and a deeper and fundamental understanding of the great challenges overcome along the way and how computer and communication technologies have evolved into powerful forces that impact the lives of people across the globe.

To no great surprise, when I first powered on that old Commodore 64, a machine that hadn’t felt the flow of electrons since the late 1980s, it didn’t work. I expected this and quite honestly relished the idea of cracking open its case and poking around inside. Fortunately in the 21st century, we have something that wasn’t in existence in the days of the Commodore 64: a global Internet packed full of information and experts that can be summoned in a matter of minutes.

After doing some reading and gaining a rudimentary understanding of the main board, I started by reseating a few chips that might be likely culprits. During this process I had a minor mishap with a broken pin on an IC that required a Frankenstein repair, but nevertheless I soon had that old Commodore 64 alive and glowing with that happy blue screen reporting READY and waiting with a happy little blinking cursor!

I found next that the keyboard barely worked, but this was a simple job of cleaning the keyboard contacts, only made a bit tricky by having to desolder the shift lock key to open up the internals of the keyboard. After cleaning, all the keys now worked and the entire computer seemed to function as perfectly as the day it was brand new.

Now that I had a working Commodore 64, I couldn’t wait to reacquaint myself with how it works and explore the programs and games from a earlier time, for which I had only before had brief glimpses while using my friend’s all those years ago. Let the fun begin!