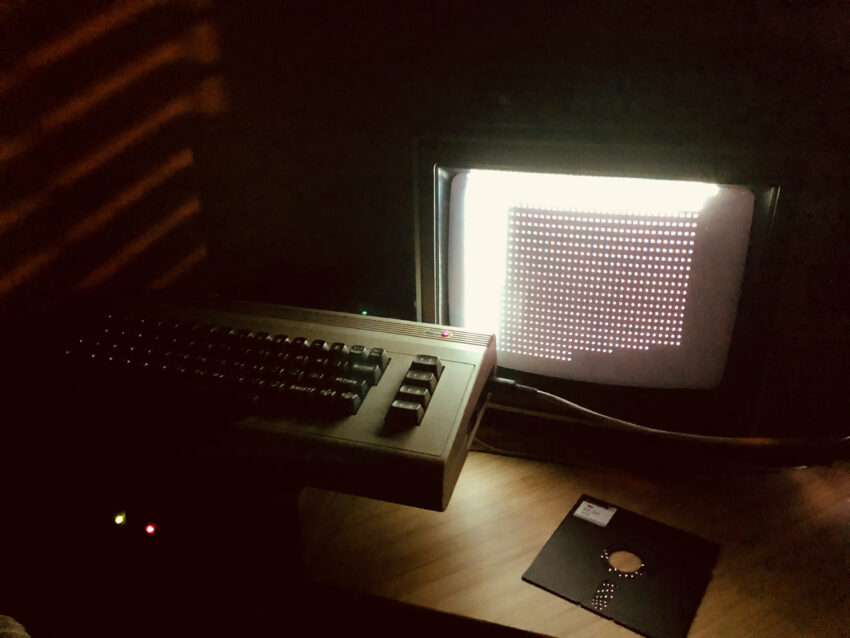 Now that I had a working Commodore 64, I was extremely excited to explore the programs and games from a earlier time in personal computing. I didn’t have a floppy disk drive for this Commodore, but I did have the original data cassette (or datasette) tape drive and using that I was able to download, record, and then load some programs onto the computer. Using cassette tapes to save and load programs recalled some of my earliest memories of using computers like the Commodore VIC-20 and Tandy TRS-80. It’s a slow and limited way for accessing programs and data from the computer, but at the time, every family had a supply of cassette tapes and storing and loading computer programs from them works surprisingly well.

While magnetic cassette tapes were cheap and abundant at the time, there was a more expensive but far superior way to store computer data in the form of floppy disks. Back then, the 5¼ inch disks really were floppy, but these days most people still running Commodore computers are now used a device called an SD2IEC. This device appears to the computer as a Commodore IEEE-488 (aka IEC) bus device, but it actually uses a modern SD card instead of a floppy disk for data storage. The SD2IEC has the huge advantage of not only being more reliable than a magnetic (and floppy) disk, but also in using an SD card it has the storage capacity of many thousands of floppy disks.

Having acquired an SD2IEC drive, I was now able to experiment and play with many different Commodore 64 games and programs. One of the first programs I wanted to try was a satellite tracker, which was high technology in my amateur radio satellite hobby in the mid-80s. For it, I had to painstakingly update its data file with current Keplerian TLE elements for the satellites currently in orbit. Comparing against the satellite tracker on my iPhone proved that this 1980s satellite tracker still worked perfectly nearly 4 decades later, and had a look not dissimilar from the classic 80s movie “War Games”.

As crazy as it sounds, I was also really feeling the irrational need to experience again the whole sensory experience of dot matrix printers. The sounds, the long trails of tractor feed paper, the careful tearing along the per-perforated lines. I located an old Okidata 120 from the Commodore era for next to nothing, and amazingly enough tractor feed paper can still be purchased new today!

In acquiring a dot matrix printer, I also happened across an original Commodore 1541 floppy drive! This was one was sold cheap in an “untested” state, but after a few minor repairs and learning how to align the stepper motor for the magnetic head, my new floppy drive was good as new too! I even found an unopened box of 5.25″ floppy disks for it.

The Commodore 64 was an extremely popular video game platform. It was released a few years before the original Nintendo Entertainment Systems with the two machines having similar capabilities. For example, they are both powered by the MOS 6502 processor, and both the ability generate great color graphics and synthesize very rich 8-bit music and sounds. Due to these capabilities, there is a very large video game library for the Commodore 64 from the decade when it was one of the dominant gaming machines. Not only that, but there are still several active game developers even now releasing new games for the Commodore 64!

In addition to the meteoric rise of video games, the 1980s were a period of innovation in early computer communications, using the new RS-232 serial standard as well as data transfer over analog telecommunication lines using modems. I was fortunate enough to experience these early days in computer communication myself during my teenage years, which give me an appreciation of how far we have really come in telecommuncations, with WiFi and cellular networks providing fast and omnipresent internet to everyone, everywhere. Back then, however, the state of the art was the ability to transfer files between computers using serial (and later parallel) cables and also using modems to dial into computer bulletin board systems (BBSes) and then later into connecting to the early Internet using terminal programs and dial-up protocols such as SLIP and PPP.

I just had to experiment with how the Commodore computer could be used to communicate with the outside world, and so I built an RS-232 serial interface that connects to the user port, and experimented with direct connections over serial cable and also found one of my old US Robotics modems to connect to the last few remaining BBS systems still connected to the telephone network even today.

Taking a deep dive into Commodore 64 peripheral devices such as dot matrix printers, cassette tape and floppy drives, and modems was a great immersion into the burgeoning growth during the 1980s of the capabilities and applications of personal computers. Using computers to store and process data spoke to their origins, but the “killer apps” for personal computers were then, and still are, video games and communication over computer networks.

Video games allow us to explore the limits of human imagination and creativity in a medium that is more accessible to all, creator and player alike, than previous media of film, radio, or stage plays. Plus, video games surpass even film and video productions in one vital aspect: they are interactive rather than passive. Even those primitive text adventure games dating back to the earliest days computing such as Colossal Cave Adventure, the predecessor of my beloved Zork, allowed the player to control the narrative in a way that film never can, allowing video games to mirror reality while placing the player front-and-center in the role of the hero protagonist.

The ability to communicate across vast distances, with computer technologies providing instant transmission of electronic messages using BBSes and eventually email, as well as conversations in real-time using text messaging was a major evolution in the powerful telegraph, telephone, and radio communication inventions of the previous century. Even at the slow transmission speeds and with those primitive network technologies of the 1980s, computer communication was a compelling leap forward in the universal access and reliability of information exchange. These early developments led to the crucial and amazing global internet we have today, which in many ways continues to shape our journey as humans, as much as the Gutenberg printing press and the ubiquitous availability of books benefited the course of prior generations. A glimpse back into the humble origins that have evolved so quickly give a clear perspective and appreciation of much we have been able to harness computers to our great benefit, and the potential of what is yet to come.