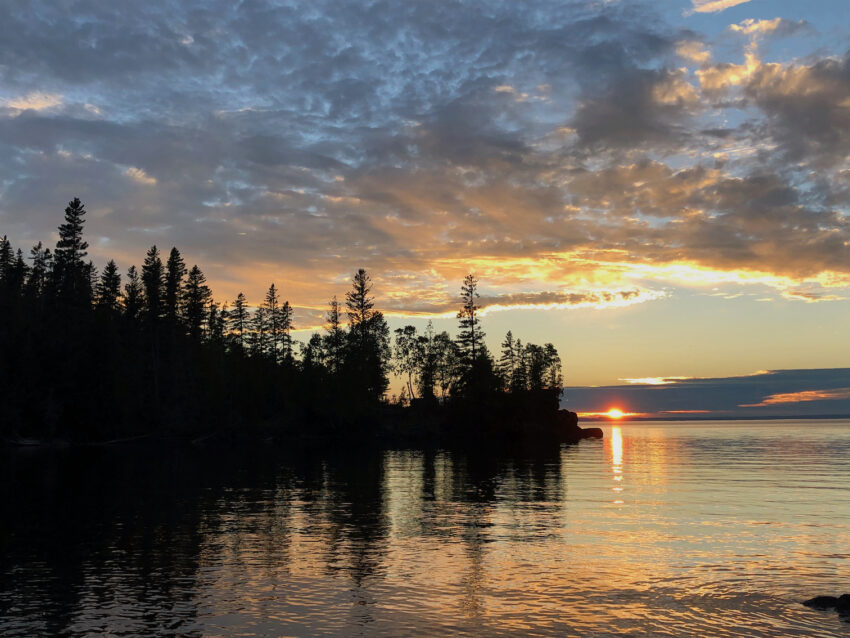 In July 2022, my friend Brian Headlee and I drove up to Minnesota’s North Shore of Lake Superior for a few days of outdoor adventures, including an excursion to Isle Royal National Park and fishing for the elusive muskellunge.

After a long drive from Des Moines, we reached the North Shore and had a great dinner of walleye and pie at the Rustic Inn Cafe, one of my favorite restaurants in the area. After dinner we still had plenty of summer sunlight at this latitude, so we hiked in Tettegouche State Park along the Baptism River to the High Falls, which were flowing vigorously.

Having adequately stretched our legs, we drove northwest to our campsite for the night, in Superior National Forest near our fishing lake, where the resident mosquitos welcomed us happily into their home.

Bright and early the next morning, we met our fishing guide and boarded his boat on a cool, clear lake in Superior National Forest. Today was day Brian would continue his quest, which had spanned the years since his childhood, to catch the elusive muskellunge, the maashkinoozhe in native Ojibwe (meaning “great fish”), or more commonly known to anglers as muskie or “the fish of 10,000 casts”. These wily hunters of the lake are smart and suspicious, and they really don’t like to be caught.

We fished well into the afternoon, watching several muskie chase our lures right up to the side of the boat only to get spooked at the last second, diving away deep rather than taking the bite. Finally, when we were getting close to packing it in, Brian landed his muskie to the sound of the bell that reverberates throughout the Universe whenever a life quest is completed!

The next morning we rose early again to catch the ferry to Isle Royale National Park, traversing the two hour expanse of Lake Superior on an exceptionally calm and clear day. With each passing mile, you could feel the excitement and anticipation of the passengers building to a palpable level, with this trip to the isolated, remote Isle Royale being a dream adventure for many aboard.

As Brian and I only had a single night on Isle Royale, we disembarked at the Windigo visitor center on the western part of the island. Once we had completed our ranger orientation and obtained an overnight permit, we entered the forest and hiked north toward the Huginnin Cove campsite we had selected on our map, hoping it would be available when we arrived.

The 5-mile hike through the forest did not disappoint, and Isle Royale delivered in its reputation for secluded natural beauty. While we did not see any of the many moose in residence on the island, we found much evidence of their passing in tracks and droppings. The trail to Huginnin Cove also presented us with a selection of the terrain of the island. The boreal forest envelopes you in a shroud of both evergreen and deciduous trees, balsam fir, white spruce, paper birch, aspen, and mountain ash being the most common. The National Park trail crews have provided backpackers with wood planks or small bridges over the many streams and marshy lowlands that the trail traverses. My favorite section was the mile that skirted the Lake Superior shore, with glimpses of bright blue water and sky peeking through the trees to the north as we wound our way through a field of giant boulders that had tumbled down over the millennia from the steep hill rising to the south.

We arrived at Huginnin Cove in the early afternoon, and I could not imagine a more perfect campsite on the island. The campsite was within a few paces of the shore, and not only was it graced with a clear view and the serene sound of the waves upon the shore, the close proximity also permitted passage of cool lake breezes that drove away all but the most persistent of mosquitos. The cove was a beautiful arcing semi-circle from point to point, the waves of Lake Superior stilled to calm waters upon entry, coming finally to lap gently on the small black pebbles and course sand of the beach that fringed the length of the cove. The forest formed a solid backdrop right up to the edge of the beach, with tall evergreen trees standing majestically on the points of the cove.

After we arrived at the cove and unslung heavy packs from tired shoulders, we made lunch and coffee right on the lake shore. We then spent most of that afternoon sitting on that beach, drinking in this serene beauty presented by Isle Royale. The day stretched out in the languid way that only happens in summer at more northern latitudes. When the sun finally began to sink down near the westerly point of the cove, Isle Royal treated us to one of the most amazing sunsets I have ever experienced.

This sunset slowly enveloped us and the entirety of the island, bringing us along with the dramatic finale to conclude the day. As the sun finally touched the horizon, all became still: the breeze, the water, the birds, and the clouds to the north. The dimming light shifted the surrounding hues to highlight the interstice of day and approaching night, drawing you fully into the experience and silencing you, not with any sort of tension of anticipation but rather with a feeling of complete release and freedom of just being alive and present in this moment.

And so it was for a brief eternity, until the sun burst free of a small cluster of clouds near the horizon line of the water, a bright orange beacon signalling the true end of the day, and taking its leave the surrounding world sighed in contentment of a thing that is exactly as it should be.

The spell broken, we soon entered our tents in the twilight and faded into the night of the island and to sleep.

The next morning we hiked back to Windigo to await the ferry’s arrival at noon, and having a late breakfast and coffee, I looked around at the other travelers doing the same themselves or chatting with some they met on the trail. I could read in many of their faces a feeling of bittersweet longing. Many had clearly been touched, as I had, by Isle Royale and felt no great hurry to bid their farewell. All the same, the ferry pulled into Washington Harbor after having crossed much rougher waters this morning, and moored to the dock, our transport back to a much more loud and busy life. I saw eyes linger on the trees and the shore of the island, and I am guessing that several of us were already making plans to return to this very special place Isle Royale National Park.