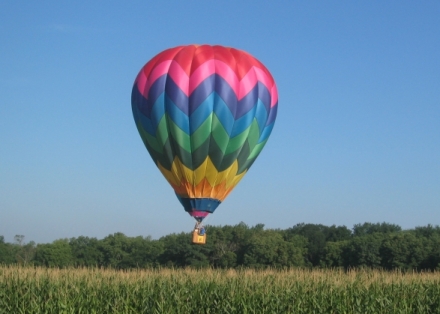 Jessica and I worked as crew members for two hot air balloons during the National Balloon Classic in Indianola, Iowa from July 29th to August 3rd. The National Balloon Classic is a week long hot air balloon competition that has been taking place in Indianola since 1969. The balloon pilots compete both for points and cash prizes in tests of accuracy, where they must skillfully judge wind speed and direction at different altitudes to be able to come closest to different sorts of targets. The flights took place twice a day if the weather permitted, just after sunrise and a few hours before sunset when the winds are most calm.

The responsibilities of the crew are to unpack, assemble, and inflate the hot air balloon. Basically, you roll out the big fabric bag that holds the hot air (called the “envelope”) and lay it out in a long straight line on the ground. The envelope is attached to the basket, which also lays on the ground on its side. Next, two people hold the bottom of the envelope open as a high speed fan blows in cold air. As the balloon begins to inflate, one person must hold a rope (called the “crown line”) that is attached to the top of the envelope very tight to keep the balloon from rolling in the wind. A couple of other people duck and crawl beneath the inflating fabric and pull it outward to the side to help the envelope to inflate more fully. Then, when the envelope is mostly full of cold air and the balloon has more or less taken shape on its side, the propane burner is fired into envelope causing it to inflate fully and stand up slowly. The person tugging on the crown line is pulled forward, skiing across the grass on her shoes as the balloon pulls the line forward and upward. Most of the crew frantically scrambles and jumps hold of the basket to keep it from launching until the pilot is ready. At this point the passenger must jump in, and the crown line is attached to the basket. Finally, when everything looks OK, everybody lets go and the balloon rises into the sky and is carried away by the wind.

All of this was a lot of work in the 100 degree heat, and not only did the sun beat down, but the fire from the burner would lick at your face and arms if you were lucky enough to be holding open the bottom of the balloon.

After the balloon was launched, we would all hop into the back of a pickup truck and chase madly down country roads, getting blanketed with dust from the gravels roads, while guessing at where the balloon might land, the goal being to arrive before it did. The ride in the back of the truck was the time to be awed by the sight of nearly a hundred hot air balloons filling up the blue sky, all drifting slowly above the corn and bean fields of Iowa.

When the balloon landed in some random alfalfa field, the crew would first have to get permission from the land owner before traipsing onto the land ourselves. Once we were allowed on the land, we would run over and reverse the process described earlier. The balloon would be deflated by opening the flap at the top, allowing the hot air to escape (hot air rises), while the crown line would be pulled tight to keep the envelope in a long straight line as it descended to the ground. When the envelope was laid out of the ground, a couple of people would start at the bottom and “milk” the rest of the hot air out of the envelope by hugging the fabric while walking toward the top of the balloon. Finally, we would pack the envelope neatly back into its bag, to be rolled out easily next time. Basket and bag would be loaded into the truck, and the work for the day was done.

Crewing for a hot air balloon is a bit of work and requires you to wake up way too early in the morning, but it is also strangely addictive. The obvious reward is the occasional ride in the balloon as a passenger, but even without that it is still a lot of fun.